Greetings to all my Esteemed Reader(s). It’s rudyblues here, back with another edition of  Throwback Thursday! That time of the week when we meander most merrily down Memory Lane to meet a morsel from the mists of time. 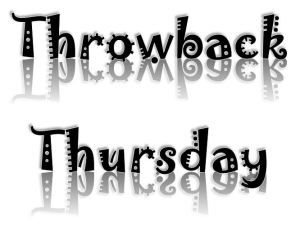 As some of you know (unwillingly, perhaps), Throwback Thursday is a recurring feature here at Rudy’s Ruminations. The intent is to reacquaint my gentle reader(s) with some of my lesser known earlier work. That and I’m looking for ways to keep slacking off.

Here’s how this Throwback Thursday thing works. I take this nifty boilerplate post I’ve created, add the date, add a short paragraph extolling the virtues of the previously unrecognized gem you have the opportunity to read, tack a previous post onto the end, et voila! Throwback Thursday! You get the Throwback Thursday post in your reader stream, scroll down to the previous post, and enjoy the (not so) great literary stylings of rudyblues. I get views, maybe clicks, and possibly visits. You get . . .  well, I’m not exactly clear on what you get, I was hoping to come up with something more for you, perhaps later. So here we go.

Here’s a second look at a rant. Just a rant. Sorry. Just can’t help it. It’s a rant. Originally posted January of 2016. I hope you enjoy it.

This is in response to the Daily Post prompt “Keeping up with the Jones’”, where they ask me to “Tell us about the one luxury item you wish you could afford, in as much detail as you can. Paint a picture for us.” Right. I’ll paint a damn picture.

Well. To borrow a phrase, “I come to bury Caesar, not to praise him.” It’s not the nice things that I’m burying. Nice things are, well, nice. It’s what drives the whole “keeping up” thing that I’m here to bury. And it’s the cause of a lot of heartache and frustration.

Ours has become such a consumer-oriented society that we rarely consider it any longer. It seems that so many of us must have the biggest house, and the biggest car, and the latest I-phone, and the hottest designer bags, and the Air Jordan sneakers, and the list goes on and on and on. And it’s never enough!

Human nature. Ah, that fickle fiend, human nature. Humans are one of the only primate species to display the emotion of envy (those who are anthropomorphically inclined interpret some behaviors exhibited by the great apes as envy). The word envy is derived from the Latin word invidia.

In Latin, invidia is used in many contexts, with various meanings. The most common use of invidia in an emotional context is for the sense of injustice and pain felt when encountering undeserved wealth, power, prestige or authority exercised without shame. The emphasis, in my book, is on the “without shame.” It’s how you feel when those who “got it” flaunt it openly and without guilt.

This human trait was recognized long, long ago, so long ago that it’s included in the fundamental teachings of all three of the Abrahamic religions.  I suspect it’s probably in the teachings of every “religion”, except the worship of the filthy lucre, though I haven’t studied them all. Envy is one of the “Seven Deadly Sins” in the Christian belief. It still doesn’t stop us.

The other side of envy is pride. Not pride in the sense of “I’m proud of you for winning the spelling bee” or “He took great pride in keeping his house tidy”. This pride is akin to the Latin superbia or the Greek hubris. It is first and foremost on many lists of the Seven Deadly Sins and is thought to be the most serious and the source of many of the other sins. Think conceit. Dante defined this kind pride as a love of self that is “perverted to hatred and contempt for others.”

If you flaunt it, if you’ve ever thought or uttered the words “those people”, you’ve exhibited this kind of pride. Shame on you. If it wasn’t for you, there would be no envy. There was a time in the United States, or at least in the parts I hail from when flaunting it was considered in poor taste. Think about Warren Buffet. He lives in the same modest house he started out in. That’s how it used to be. Not so much now.

And then there’s greed. How much more money do you need, Sheldon Adelson?  You couldn’t possibly spend all your money in what’s left of your life, even if you paid a boatload of accounts to find ways to spend it. And it’s never enough!

Let’s talk about popular culture. When we worship pop culture icons we force pride upon them to justify our envy! And when they refuse to display the pride we force upon them then we envy their non-pride! I would not want to be a pop culture icon today. It’s no wonder child stars often end up as they do. They haven’t been given the tools to deal with pride or envy, and then they’re thrust onto a pedestal and worshiped.

The same can probably be said for many of the children of the “helicopter” parents, who make sure that their children have no balance between self-worth and the worth of others. This is perhaps the most egregious child-rearing sin of all. I’m reminded of the punk in Texas who argued “affluenza”. What? We had to invent a disease to describe your sinful pride? And it’s never enough!

And don’t even get me started on advertising. Using psychological subterfuge to prey upon someone’s self-image to sell a product is wrong. Just wrong. I got nothing more to say on this.

A fellow traveler in our journey around the neighborhood thermonuclear explosion. Full of random thoughts and esoteric observations about the human condition, how we treat each other, and other detritus of life. View all posts by rudyblues57

Not a photo of rudyblues...

"If it's the Psychic Network, why do they need a phone number?"

Search for a Rumination

The Book of Life 📖

Symphony of my experiences in travel, tech, food and everything else I love.

a blog about history....

The Butterfly Effect
She's A Maineiac

a place for beautiful, extraordinary things in an ordinary life

Travel For Nature
At My Desk